What is the difference between a corrida and a novillada and why is it cheaper?

Nowadays, a novillada puts up a show that highly resembles a corrida. The only differences between them are the size, age and condition of the bulls and the fact that the matador has not yet received his alternative.

In short, the novillo is a three to four years old bull and the novillero is preparing to become a matador and consequently, he is usually younger than a bullfighter. At four or five years old, a fighting bull weights around 500 to 600kg.

That’s the reason why, in spite of offering the same show, it is always cheaper attending a novillada than a corrida.

What is exactly a corrida?

There is no such thing in the world like a corrida, nothing compares to it. In addition to being the expression of one the most genuine Spanish traditions, it is the fight between a man and a huge wild animal. The torero is an experienced bullfighter and the fighting bull is an animal that has been especially bred, chosen and prepared for as long as four years only and solely for a bullfight. Therefore, the viewer has to make a constant visual and mental effort to piece together this exciting fight between man and bull. In a corrida, the bull is not only the main player but also the main objective in the show. A corrida is best enjoyed when the viewer makes the effort not to lose sight of the bull. Naturally the audience must also pay attention to the bullfighter but the bull should always come first. This is the best way for the viewer to properly link both performances. 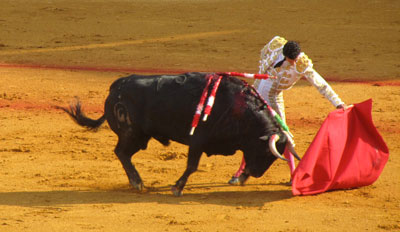 The bull’s general condition cannot be easily recognized since it’s usually quite confusing, something that more often than not leads to disagreement on the interpretation of bullfighting.

The bull’s sustained ferocity is going to undergo a radical change throughout the show, as this wildness will experience a progressively measurable modification by the punishment and incidents of the fight. With this aim in mind, particular attention must be paid by both the matador and the audience, which in the end will have to estimate and evaluate the bullfighter’s performance: any errors in this field will prove fatal for the bullfighter but technical “blindness” or misunderstanding by the fan will certainly lead him to injustice.

At the exact time set for the opening of the show, the Presidente (the person upholding public order who exercises the executive functions of the fight) will mark the start of it by showing a white handkerchief. At this moment, trumpets and timpani will announce the beginning of the bullfight. The Alguacilillos (wardens) will then enter the arena so as to, after attaining permission from the Presidente, proceed to “despejar el ruedo” (clear the ring) and do the opening procession or paseíllo. Then enter the toreros and following them, the Picadores, the Mozos de Caballos (the horseman’s assistants), the Areneros (the men in charge of the sand in the bullring), and the Mulilleros (the men in charge of bringing the dead bulls out of the arena). Finally, the Alguacilillos give the Torilero (the person in charge of opening the bullpen) the key to the toriles (bullpen). He will only retreat once the ring is completely empty.

After the sound of the bugles, the door of the bullpen is opened and then the bull goes out into the arena. The show begins! The beginning of the bullfight takes place only after the first capotazo (the torero using his cape). It is often argued that the bullfighter needs to check if the animal responds and charges before proceeding to artistically confront the bull and use the cape. So, the first contact with the bull is generally performed by the members of the matador’s team. “Blinding” the bull with the cape while facing him (recortar and empapar al toro) is absolutely forbidden as he might hit or even break the burladeros (barriers) down. And this is so because when the bullfighter “recorta” he usually makes the bull change direction and this generally bring along the animal’s bad habits.

As for the rest of the show, you’d better get your bullfight tickets and live it up!

What is a corrida de rejones?

Unlike a corrida, a rejoneador (lancer) is a bullfighter who fights the bull on horseback. The art of rejoneo is consistent with a longer history and tradition of tauromachia, when the bullfighters on horseback and not those on foot played the main role in a corrida. The rejoneador gets his name out of his way of fighting the bull, trying to demonstrate his skill and nerve in controlling both the bull and the horse by stabbing on the bull’s back different rejones and banderillas (lances and flags) through the use of harpoon-pointed colourful sticks. The wooden stick used by a rejoneador measures around 1 to 1,5m and is called rejón.