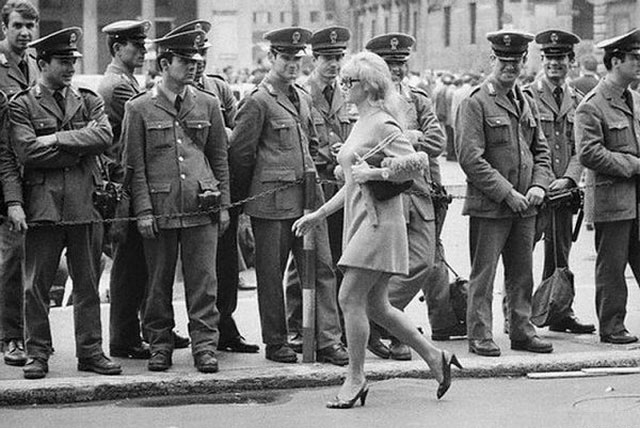 I must confess: Manolo Escobar´s song (translated to english as the title above, “no me gusta que a los toros te pongas la minifalda” in spanish) is to a great extent guilty of my late bullfight fondness. In spite of this I must say that, in my scarce intrusions to Las Ventas bull ring –always avoiding crowds due to this online tickets sale website-, I haven´t seen a hint of male chauvinism in the arena (and I declare this as a female enthusiast wearing pants not for prudence, but for convenience). Until recently, I had only associated the term “cutting an ear off” with the great and wretched Vincent Van Gogh.

Two black banderillas for me, please… but I have learned a lot, since then: I can catch Line 2 in the Metro with eyes wide shut. I can cross tendido 7 –front row where the experts seat- while bowing my head out of respect. I can see crystal-clear that matadors are gladiators, with the consequent reverence. A bullfight is a unique experience for many reasons: the murmuring, the elation, the silence. People squirming in their seats. A languaje spoken just by handkerchieves, the lights and the shades, the thin line between life and death. A magazine called Aplausos on top of Elle and Vogue, in my bedside table. Las Ventas arena, the most popular bull ring in the world and the biggest in Spain, belongs to my city… and it is eternal. A place that never brings you down, a spot capable of attracting visitors worldwide in order to make them live in first person a historial and ancestral tradition. Bullfighters and agents, stockbreeders, horses, experts and amateurs, wild animals, impressive line-ups… Everything´s fair, in this place, where a wise choice can be final… and a mistake, fatal. The paseillo –ceremonial entry of bullfighters- has just started, the arena is the catwalk: 68 steps with the montera –matador´s hat- in one hand. Watch out, someone´s playing the bugle! We all hope the bull has been risen to the occasion. The show begins after the first capotazo (luck made with the cape to tease the animal).

Toggle the Widgetbar
We use cookies to ensure that we provide the best user experience on our website. If you continue to use this site we will assume that you agree.AcceptRechazarLeer más
Puedes anular tu consentimiento en cualquier momento usando el botón de anular consentimiento.Revocar